skip to main | skip to sidebar

The other day I was listening to my playlist of UK number 1 hits. Being of a rather anorak-y bent, I have mp3s of every song to hit the top of the UK charts since they were instigated by NME in 1952. The track that I was particularly struck by was "She Wears Red Feathers" by Guy Mitchell.

For those of you not familiar with this song, it tells a very straighforward tale. English bloke, works at a bank in London, has a boring life. He escapes by watching the touring travelogues at the local Music Hall, and on one such evening falls for one of the "native girls" performing on stage. So he ups sticks, joins the navy, sails to the island she lives on and marries her, finally returning to London to resume his banking career with new wife in tow.

On the face of it, nothing wrong with that. Indeed, I couldn't imagine the same song reaching the number 1 spot in the USA considering its central theme is an interracial marriage - groundbreaking for the mid-1950s, and certainly something to be applauded.

But listen to the song (do a Google search or something, you'll find a copy somewhere), and all hope evaporates. Let's first examine the chorus: 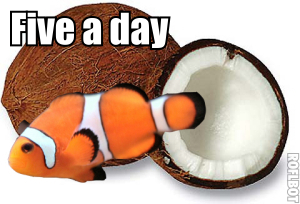 Hmmm. The use of pidgin English for "hula skirt" is never a good sign, as is the fact the Mitchell pronounces coconut as "cokey-nut" just to hammer the message home. (Mitchell - real name Albert Cernak - was a Croatian-American, despite referring to himself as a "son of an Englishman" in the song.)

Mind you, there's nothing wrong with the first couple of verses - one about how he first clapped eyes on his future spouse, and one about how he travelled to her home to meet up with her. The only reference to her ethnicity is in the fact that she's described as a "native girl" in the opening verse - a twee '50s term, because surely everyone is a native of somewhere. Still, any goodwill that these opening verses might have build up is completely lost once we get to verse three and everything goes to shit:

I went to her ma and pa
And said I loved her only.
And they both said we could be wed
Oh! What a ceremony.

Seems okay so far. But what's this coming up in the next four lines...

An elephant bought her in,
Placed her by my side
While six baboons got out bassoons
And played "Here Comes The Bride".

Jesus Skateboarding Christ, I don't know where to begin with that. Where the fuck is this girl meant to live!? Where can I find an island that has both elephants and baboons as indiginous species? Why do we have it drummed home in the chorus that the place is so "backward" that they only eat fish and coconuts, but they still know what a bassoon is, and are conversant enough with the works of Richard Wagner to have heard of the "Bridal Chorus" from his opera Lohengrin. Heh, look at those funny natives, carried around by elephants and entertained by woodwind-playing primates.

The song can surely only get better from here, can't it? Oh dear...

I'm back here in London town
And though it may sound silly
She's here with me, and you should see
Us walk down Picadilly.
The boys from the London Bank
Kinda hold their breath.
She sits with me and sips her tea
Which tickles them to death.

What in the name of cock is that all about? It's delieverd by Mitchell with a knowing chuckle, but the humour seems to have gotten lost in the 55 years since the song was written. How else am I meant to read this except:

"My colleagues were amazed that I had the nerve to return home with my 'native' bride. It sounds ridiculous, but we often walk down the street together! And when she drinks tea, of all things, my colleagues think it is the single most hilarious thing they have ever witnessed."

Of course, when this song made it to the top of the UK charts, no-one batted an eyelid. I'm sure it means well, but listening to it again in 2008 makes me feel slightly uncomfortable. I think I'll have to have some halibut and coconut chowder to recover...

Posted by PeakSteve at 23:02 No comments:

I predict a man from Leeds

Today I learnt that a native of Leeds is called a Leodensian. I can add that to Novocastrian (Newcastle) and Wulfrunian (Wolverhampton) in my list of "places where I know what the natives are called".

In 2005 at Taunton we'd started a tradition of taking a popular tune and rewriting the lyrics to use as the volunteers' entry in the final-day "talent" show. Back then it was a reworking of (Is This The Way To) Amarillo, and because I wasn't leading the holiday I had room in my car boot to fit a keyboard for some live accompaniment. 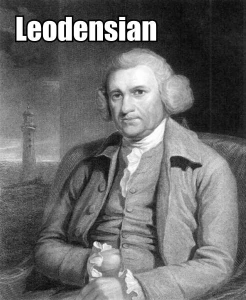 It was a different story space-wise in 2006 (despite me owning a much larger car by then), and until the second half of the week we hadn't given any thought to a song for the final night. Ross came up with the line, "Watching the kid don't eat dairy..." and from this we decided that a reworking of I Predict A Riot was called for. A collaborative effort, Ross and I would both work on it and then combine the best couplets that we came up with to create the final version. An excellent plan, with only one problem - neither of us knew what the original lyrics were.

Ross had the mp3 on his phone, so I took a copy and spent Friday morning on a playing field in Fareham listening repeatedly to the original whilst the coaches from Portsmouth FC did a footy skills session with the kids. And whilst Ross and I both managed to decipher most of the lyrics, the last couplet of the first verse stumped us both.

That didn't matter as far as our songwriting exploits were concerned, and Will You Lot Be Quiet remains possibly the finest parody we've ever crafted (although our Away In A Manger-based tribute to Mr Robert Carter runs it very close). The full version is below for your perusal.

The fact that I also needed to work out the chord sequences for the song, and how the hell I was going to play a convincing version of it on a baby grand piano, is neither here nor there.

Back to the matter in hand - Leodensian. If you've been humming I Predict A Riot whist reading this, you've probably worked out (if you didn't already know) that Leodensian is the last word of the first verse. In fact, those two troublesome lines are:

Would never have happened to Smeaton
An old Leodensian

"Smeaton" is engineer and physicist John Smeaton, and the last line of his Wikipedia article explains the reference.

An 18th-century Leeds physicist via a kids' asthma holiday just outside Southampton; just another normal day at the office.

Will You Lot Be Quiet (Weake/Gill)

Ohhhh, watching you kids don’t eat dairy
Is not always easy I tell thee
Waking you up is quite scary
And not very sensible either
The moment your head’s off the pillow
You scream and you shout and you bellow
Making loud noise seems your mission
So we all sing out to you

Waited all evening for our tea;
The girls took an hour to get ready
They say it’s so they can look pretty;
Won’t work for the boys, more’s the pity
The bedroom floor’s got all their clothes on
You can’t reach the hook their stuff goes on
Out in the tents you got frozen
We still have to ask you all

We hope you’ve had a good time here, liked each other and ICE bear...

Posted by PeakSteve at 22:01 No comments:

Hello. You probably remember me from such blogs as, "Pie is God" and, "Kerry Catona Is The Devil Incarnate - and you can get two for £5 at Iceland".

Caution: this blog contains swearing, bad grammar and gratuitous use of the word "kettle".

For other stuff, go here