skip to main | skip to sidebar

DFS. Now, I bloody hate furniture stores. This is not an irrational fear. Allow me to extrapolate:

It's May bank holiday 2003 and Cathy and I are trying to buy a three-piece suite. Seeing as we're moving in to our house after we return from honeymoon (the middle of July 2003) we're looking at about eight weeks. The only suite we've seen so far that we liked (in Walmsley's in Halesowen) has a 12-week delivery time.

So, we've trundled to Kidderminster to see if their Walmsley's has one (it doesn't) and also been to Droitwich and into DFS. Nothing there so, having previously been unimpressed by Cousins at Dudley (although we did buy our bed from there) we head up to Cannock because we've heard that they're very, very big at Brian James.

This proves to be true, but they're also very, very pricey.

Off we trot to Junction 9 of the M6, and a clump of furniture stores, one of which is SCS. 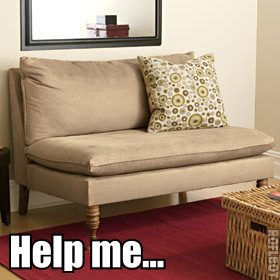 You see, as soon as we walked into SCS we were accosted by not one, not two, but pretty much every sales assistant. One after the other, they asked "Can I help you, sir?"

"Just looking, thanks," I replied. EVERY BLOODY TIME.

And then we went up the stairs to where the three-piece suites were. And made our fatal mistake. We sat down.

Cue a very slimy salesman telling us how quickly they could delivery the suite we were sitting on and how we could spread the payment over three ice ages. At no point did he ask us if we actually liked the suite in question.

So we politely pointed out that we were still just looking. And off we went to the next suite. And he followed us. All around the store.

The moment we went to sit down he would leap into the foreground and start his sales pitch. So we walked out.

(In the end, we bought a lovely suite from Courts in Wolverhampton, after being particularly impressed by a salesman who greeted us with the phrase, "Frankly, I don't care whether you buy a suite from us or not because Wolves have just won the play-off final and life is good")!

Where was I? Oh yes, DFS. Or rather, their current radio commercial.

Well, one of them. They're all annoying but this one really irks me.

Basically, it features a bloke getting chucked out of his hotel bedroom at 2am because, as he booked his stay under their half price offer he only gets to stay half the night and there are people waiting for his room.

Let's ignore the fact that there's no such thing as "half a night". Let's ignore the burning question of why someone wants to check into a room halfway through the night - did they also go for the "half price deal"?

No, what gets my goat (and some other livestock) is the fact that, if by paying half the room rate he can only stay half the night, it's not a half price offer! He's paying the full price! That's like trying to claim that half a pint of beer isn't what you should expect when you pay half the price of a full pint!!

Pah. And double pah!
Posted by PeakSteve at 01:58 No comments:

Have you heard the latest radio advert for McCain Micro Chips? You know, the microwavable boxes which contain barely half a potatoes' worth of scrapings which always either come out slightly under-done or completely incinerated?

Well, if you haven't heard it, here's a (very) paraphrased version:

Now, apart from being bloody irritating as adverts go, can you spot a flaw in the premise here?

To save you the bother of counting them, sonny boy asks for 18 friends to stay for tea. Assuming that he's going to eat as well (and assuming that both mum and dad - if he hasn't already moved in with his secretary - aren't eating), and also assuming that mum deems a cardboard box containing half a dozen shards of potato will suffice for an evening meal for a group of growing boys, all she has to do is cook 19 boxes of Micro Chips.

Let's also, logically, assume she has only one microwave oven.

It will take 57 minutes to cook the chips. 57! If, on the other hand, she slapped several baking trays of oven chips in her regular oven (along with something else to make a proper meal) she could feed the lot of them with about half an hours cooking time.

McCain Micro Chips - half the food in twice the time.
Posted by PeakSteve at 01:36 No comments:

Hello. You probably remember me from such blogs as, "Pie is God" and, "Kerry Catona Is The Devil Incarnate - and you can get two for £5 at Iceland".

Caution: this blog contains swearing, bad grammar and gratuitous use of the word "kettle".

For other stuff, go here